Traditional banks are losing customers to nonbank competitors because they still lag the digital experience offered by leading fintechs, established specialist companies and major technology companies. In order to stay in the game, retail banks must improve their digital channels’ interface and functionality, according to research by Bain & Company.

In a report titled As Retail Banks Leaks Value, Here’s How to Stop it, the consulting firm shares findings from its tenth annual study on retail banking and delves into how retail banks are leaking customer business to competitors. 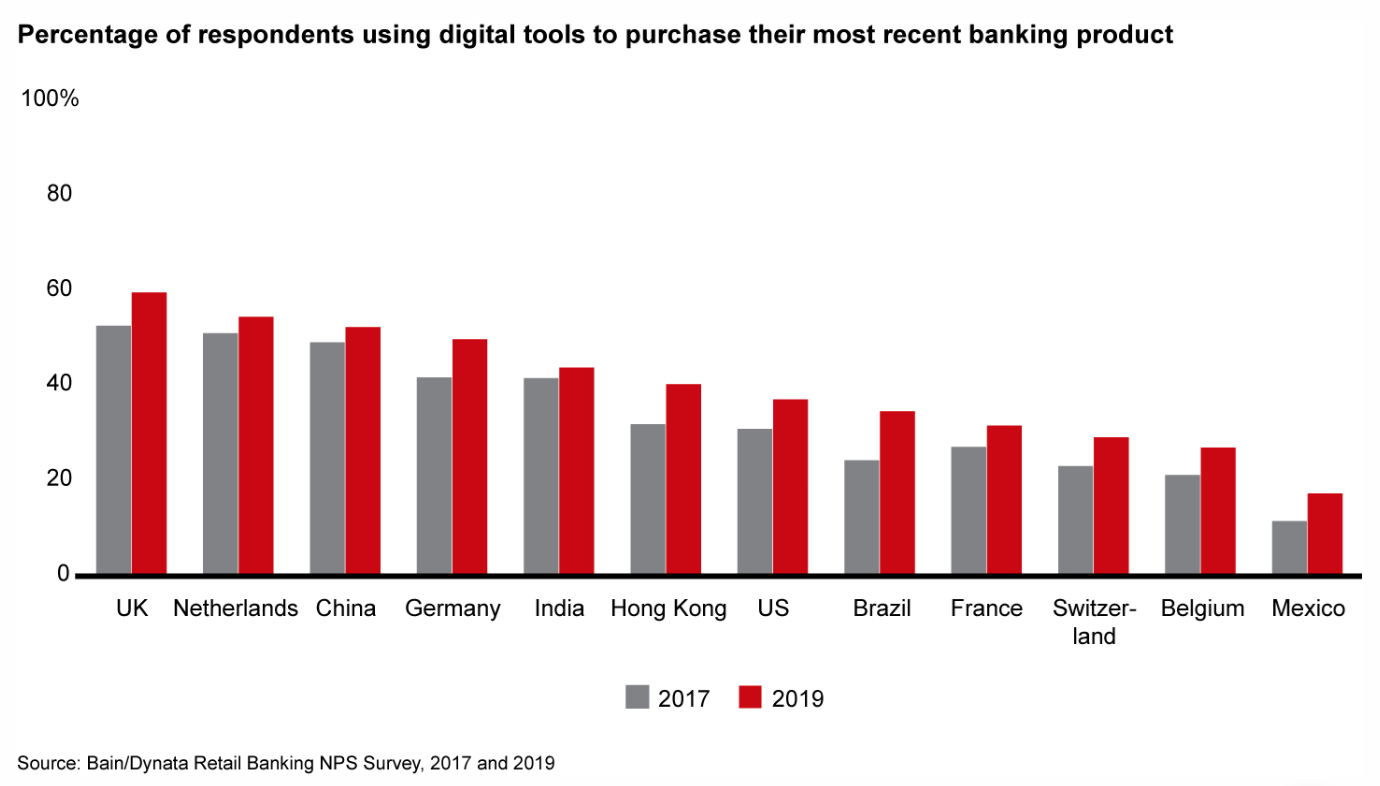 Percentage of respondents using digital tools to purchase their most recent banking product, As Retail Banks Leaks Value, Here’s How to Stop it, Bain & Company, November 2019

According to the research, customers in many countries, but most particularly those in emerging markets, are willing to try banking with a tech company such as Facebook or Google. Nearly 90% of survey respondents from China, and about 80% in Colombia and Brazil, said they would be willing to bank with an established tech company.

Percentage of respondents who are open to banking with a technology company, As Retail Banks Leaks Value, Here’s How to Stop it, Bain & Company, November 2019

Percentage of respondents who have used these companies in the last 12 months, As Retail Banks Leaks Value, Here’s How to Stop it, Bain & Company, November 2019

Although customers are increasingly preferring a digital-only experience for purchases and research, the study found that most prefer human interaction for larger purchases, such as applying for a mortgage or opening a general investment account.

A major US bank’s episode Net Promoter Score, by starting and ending channel, As Retail Banks Leaks Value, Here’s How to Stop it, Bain & Company, November 2019

In this changing landscape, the report advises banks to formulate digital strategies that focus on eliminating the pain points that frustrate customers and work to drive certain purchasers towards digital sales while maintaining some human interactions for key moments.

Ultimately, banks will need to develop a broader ecosystem of partners and suppliers as the survey results show great interest in a one-stop-shop for personal credit, managing personal finance and running a small business.

In this regard, the report notes that several banks have made great progress. In the UK, NatWest launched Home Agent, a digital platform that connects first-time homebuyers with partners offering varied services including valuation, utility deals, moving services, cleaning services and general contracting. In the US, Capital One offers online vehicle listings and tools to immediately prequalify car buyers for financing, and in Singapore, DBS Bank runs the largest direct seller-to-buyer car marketplace in the country.

In addition to meeting customers’ needs, banks must leverage digital technologies to improve backstage operations and cut costs. The Royal Bank of Scotland, for example, has developed a digital mortgage product which has allowed it to eliminate 66 pages of paperwork and reduce the time to close from 23 days to 11 days.

All credits for this article to the original source below: